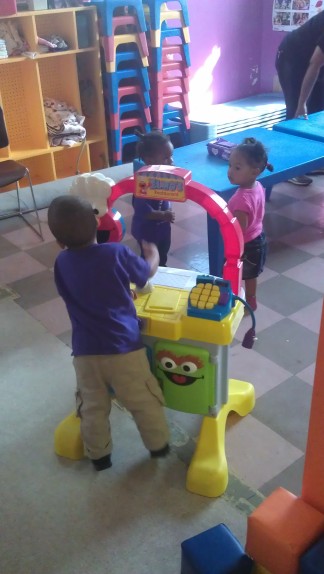 A few days ago my mother took my nephew to see one of his best friends (his mother is a teacher there) at his old preschool.  I went as well to get all of the information that I would have needed to get Cydney ready to start daycare there in a few weeks.  Although I had been there plenty of times before I took the tour, asked questions, and tried to see how much I could possibly knock down the monthly cost of enrollment.

Knowing how y my child likes to run around, get into and destroy any and everything I tried to hold her during the walk around.  She saw all of the children and had other plans.  I put her down, and she began to walk around and play with all of the other children who were about her age.  They happily assimilated her into the fold and started asking question in baby talk that even though no words were being said they understood each other (amazing, isn’t it?).  The teacher gave Cydney some cookies ad the first thing she did when she got them was say “Here!” trying to share with all of the other children.  As I watched her play she didn’t once look back at all and was in the groove.

I am man enough to say I almost began to well up inside.

I think that was for many reasons.  1) The little baby that had no teeth was growing into a real person.  We all know that’s going to happen but you don’t realize that gradual evolution until a milestone hits. 2) As a parent you want to shelter your children from all of the harm that is in the world and the day that they start some kind of schooling there are other things influencing your child.

I was telling a friend of mine who has a two year old about it.  I was assured that she will be alright but on that first day I probably will not and expect to have a few “moments” that day.  My sister told me that on the first day will be one of the longest days of my life because all I will be thinking about is her at school.  I’m sure this is all true just based on those fifteen minutes.

Oh, and I also kept an eye on the boys.  I know they’re only two but I can’t help it.

3 thoughts on “I Wasn’t Ready”