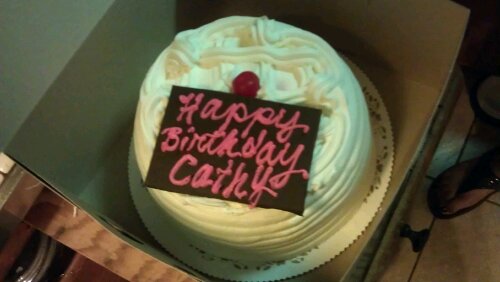 This Sunday was my mother’s 29th birthday. As I’d stated before we went to the city (that’s what us locals call Manhattan) to go to this Sisters Circle Convention. They started oft with a church service by the legendary Hezekiah Walker which was great. They had all kinds of vendors and panels as well about everything from hair products, to health/awareness, and all kinds of stuff as well as concerts. I wasn’t really interested in the vendors since it was Circle of Sisters I wasn’t really their target audience but nonetheless I had a good time.

In July of 2011, my mother was diagnosed with stage two breast cancer. My mother went in for her annual checkup and got some pretty bad news. She was quite upset about it and rightfully so as my father and sister took her out to cheer her up. The last thing she wanted to do was call and tell me being that I was already neck deep into my fiance’s cancer fight (yes my mother and my girl at the same time). My father called and told me. I think because of what I’d already been going through and my knowledge of treatment I was upset but I knew she’d be alright. I also knew what she’d have to go through.

While I was in Buffalo and Virginia I’d pep talk her through the process and however she felt at the time. When she told me that she might have to get a double mastectomy and she didn’t want to do that I understood because that’s a womanhood thing. But what I said to her was I wish my fiance could just have surgery and that put things into perspective.

I think early November was the first time my mother had gone through chemotherapy. When her and my father had come down to see why my fiance’s parents were being assholes my mother and fiance got to see each other one more time. My mother had shown her her bald head and she smiled as they briefly talked and related about how terrible chemo makes them.

Three weeks later my fiance passed away and I began getting my legal beagle on in the case to get Cydney back. I’d helped my mother and my family through the processes since I really knew what was going on. When my mother had surgery (only had to remove the tumor and lymph nodes) I’d sat in the waiting room and began to feel weird because I’d been here before. When the doctor came in and explained what medicine she was taking and I asked questions about dosage and why specific medications she asked if I was a doctor. I said “No, I’ve just been here before.”

A week after surgery we drove down to Virginia to go and get Cydney. Here we are a year later. 8 rounds of chemo, one surgery, twenty-something rounds of radiation, and a few weeks into taking the five year pill. My mother has gone back to teaching (she did during the process as well) and all is almost as well again.

With that said “Happy Birthday Mom.”

(One more thing we asked my mother what did she wish for last year when blowing out candles. We asked if it was to be here next year. She said no.)