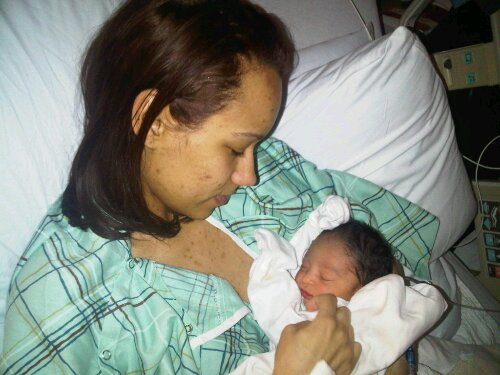 February 15, 2011 I woke up from a few hours of sleep excited. I received a text message from my fiance in the hospital that said “Good morning, Dad.” What a high. I responded “Good morning, Mommy.” She told me they brought Cydney in from the nursery. I knew she was excited as I was getting dressed to head right up to the hospital.

I remember putting on a pink Polo button down shirt for my little girl and she said “Guess what? I made up a song for Cydney!” She sent me those lyrics that I typed. I smiled and thought it was adorable and my girl being a mom really sunk in right then. As a musician I loved it. I always used to ask her to help out with a song lyric or two because she wrote poetry. She only did maybe a couple of times. She was a singer as well but only sang for me once and that was at the very beginning of our relationship. In person that day I got to hear it live. When they came home from the hospital I made a recording of me playing it on piano for them as a welcome home.

Around July when we were neck deep into her cancer treatments I caught a moment on video. I remember thinking as I filmed it this is a sweet moment and if she were to pass away this video I would show Cydney growing up letting her know her mother loved her dearly and here’s where you can see it and know she’s always watching her. When she passed I had the video on her laptop and couldn’t find the charger for months so I never watched it.

That March, I found the charger the day my mother had her tumor removed from her own cancer battle. As my mom was actually in surgery and I was waiting I found the video. I was waiting in a room for surgery like I had done many times in that last year and it felt surreal. As I watched the video I began to well up a little bit. I was missing her and my little girl I hadn’t seen in four months at that time. That was the only time I had teared up about my fiance since she died. I mean that, too.

Since I’ve had Cydney back she’s had plenty of sleepless nights. Many times I’ve felt the urge to sing that song but just couldn’t. It would be sitting in My chest and I just could not utter it. I’d sing it in my head and would always confuse the words a little bit. This morning, Cydney woke up startled and would not go back to sleep. After trying for a good forty-five minutes. I said “Here goes nothing” and sang it to Cydney. She calmed down immediately. As soon as I sang it the words just how she wrote them came back to me. I didn’t get overwhelmed with emotion as I sang it but felt peace like doing that was really the last thing I needed to do to say goodbye and really continue to move on from my love that was no longer with me.

Of course she woke up and continued to holler for another two hours. But at least we had that moment.