*Today’s post has quite a bit of adult language* 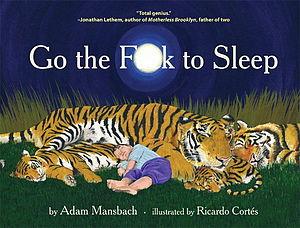 Go the F**k to Sleep is an illustrated “children’s” book written for adults written by Adam Mansbauch that was released in 2011. I heard of the book last week via Instagram. A friend of mine who is a mother posted a picture of the book and I had no idea it was real. I thought it was a meme that someone made being funny. Once she told me it was real and that the audio book was narrated by none other than actor and my favorite Morehouse Man, Samuel L. Jackson I had to look for it.

I immediately looked it up and found it hilarious. Mr. Jackson starts off saying how he heard of the book. He told the story of how reading a story to children at bedtime doesn’t work (which is very true) and how often he would tell his daughter “Go the fuck to sleep” to the point that she would sometimes say it back in a jovial tone was hilarious. It had me cracking up because as I was listening to it quietly while waiting for Cydney to fall asleep thinking the same thoughts. She was laughing because I was. However, she started to get quiet and went to sleep. That in itself was amazing. I texted another one of my friends who is a mother about it. She said she knew about it and she said she heard of it. I was upset with her for not sharing this with me a long time ago.

Cydney is a handful to put to sleep. The other night,  Cydney was giving me a hard time. We’d done our routine and she still wanted to be awake and play. As a last resort, I put this on and she went to sleep. I did it again tonight and she kept saying “Go to sleep, Chad!” She was getting in the spirit of it, then turned over and went to sleep.

While this isn’t necessarily a practice I recommend for all parents, its working for me. Go the fuck to sleep is exactly what I and most parents think during this tender age where your child wants to stay up and ask a myriad of questions, sing songs, and cry their eyes out when they and you are tired. I recommend buying the book. Here’s the link.