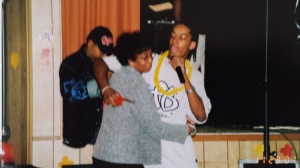 Today it finally happened.  My grandmother passed away this morning at Jamaica Hospital in Queens, NY.  I’ve been pretty sleep deprived the last couple of weeks just dealing with things and trying to overall get things together.  I’ve been disrespecting my alarm clock’s 4 AM ringing and woke up late today: 6:30 AM.  My mother came into the room and told me that she was gone.  I was just over there last night and saw her.  I didn’t like going over there and felt like our last conversation was the right way to say goodbye.  It turned out she wasn’t gone just yet.  She still had a heartbeat and they’d put her on a respirator until my uncle got to the hospital.

I got the call at 10:33 AM that she had officially transitioned.  It wasn’t really a feeling of melancholy because I’d prepared for this.  I knew it was coming and honestly she lasted longer than I thought.  I had said last week that she wouldn’t make it past Wednesday and that I thought she’d go on Sunday.

Enough of the melancholy stuff.  I lived three blocks away from my grandmother.  We used to go over there all of the time for dinner.  Just about all family functions took place at her house.  She was the bomb cook.  Her ribs were my favorite food on earth.  When I was in high school she was the one who’d braid my hair.  We talked about some of everything as we watched Golden Girls or whatever she wanted to watch on Lifetime while she’d do my hair and always put her “signature” some kind of zig zag in the corner of the back somewhere.  As I’ve said a few times on here she was someone I could just about always talk to.

The way I feel right now?  On the surface it’s just another day.  I’m at home working on writing, looking for a larger full time paycheck and knowing that Cydney will be awake any day.  I took a look at my little girl who is asleep in the other room.  One day she’ll have to go through what my mother currently is for me.  She and I have both been through this already.

That last sentence says it all.  I’ve been here.  When I saw how my grandmother had looked yesterday and in the last couple of weeks is how Timile looked the last times I’d seen her.  I think about how during that span of September-December 2011 Timile didn’t feel like herself and questioned how I felt about her.  She was bald but her hair was slowly growing back.  She was under one hundred pounds.  While she wasn’t a new mother she didn’t feel like she was no longer the long haired beautiful girl I loved to show off anywhere I could.  She’d say that to me every once in a while and she’d look at me or her face would show that.  I’d reassure her all the time she’s still the twenty-one, two, three, four year old to me that I was in love with.  I meant it, but it was hard to look at.  I made sure she knew that until the end and if this is how she’d look for the rest of our lives I’d still think and feel that way about her.  More than anything that is what I am thinking about.  As proud as my grandmother was she wouldn’t have wanted anyone to see her like this and neither would have Timile.

I look at the place that I am at currently in my life.  I’m trying and I think succeeding given the circumstances and making the best for my little girl.  No matter how much I am and have moved past my past, this is still something that is a part of me.  It made me.  This summer my grandmother would tell me she wanted me to move on and try again and the fact that I’d begun to do so with someone else she was very happy to hear that.  She’d tell me she wants me to get married again while Cydney is young and can’t have much of a say because that would make things difficult.  I’m probably repeating something I’ve said before but it’s topical.  That was said in jest but I’m pretty sure she meant it.

As hard as things are right now, it could be worse.  There isn’t much to be sad about.  My grandmother is in a better place.  She lived a wonderful life and she was ready to move on.  I know my grandfather is happy to see her again and I’m pretty sure Timile is elated to see “Ma Stine” as well.

For other posts about my grandmother:

Valentine’s Day, Timile, and My Grandmother

Conversations With My Grandmother Pt. 2

How I Met Your Mother: Conversations With My Grandmother Pt. 3

Someone just woke up…She wants my iPad and ran off looking for it.

2 thoughts on “My Grandmother”