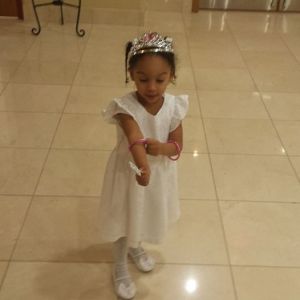 Nunu is what my grandmother called Cydney and that is what Cydney called her.  My grandmother used to say that Cydney reminded her of the cartoon Lil’ Lulu; but Cydney couldn’t pronounce that very well so she’d say Nunu.  Yesterday morning I woke Cydney up and told her that today was going to be a busy day because we had to go to Nunu’s goodbye party.  Like she does for everything these days she asked me why and I explained.  I’d told her once again that Nunu died and was in heaven with her mother and that we were going to church to throw her one last party to say goodbye.  Once I finished explaining this to her she gave me a big hug and was off to run around like any typical Monday.

Things have been hectic and beyond stressful around here.  Emotions are on high and that isn’t something that is synonymous with patience.  Sunday afternoon my father asked me if I wanted to sing “A Song For Mama” with him at my grandmother’s funeral.  I said “Ok.”  I don’t really sing that often and it’s one of those little known facts that people are surprised to find out I can carry a tune.  Practicing the song was not easy.  As soon as those piano chords start on the song it tugged at my emotions a little bit.  I listened to it twice and needed to turn it off.  Being the showman that I am, I thugged through it and listened to it all day yesterday because as it turned out I didn’t know the words at all.

Rehearsing the song over and over to myself was actually quite therapeutic.I needed that.  I got to my father’s house, we rehearsed a few times and somehow I realized I could actually sing the bridge to the song full voiced–high notes and all.  I had a drink to take the edge off of what was to come and then it was time to head to the church.

My mother asked me what did I drink and I replied “Yep!”  It was good seeing a lot of the people there that I hadn’t seen in a long time.  Many people hadn’t seen Cydney and they were excited to see her as well.  Many people said to me they feel like they know her because of the blog and the various pictures I put up.  People acted like they knew her but Cydney wasn’t having it.

Cydney sat through as much of the funeral as possible.  In reality that was a total of twenty minutes and then it was time to head into the hallway.  Cydney wore a princess tiara, bracelets, and her magical wand.  I knew it was time to go when Cydney started pointing her want and saying “Bibbity Bobbity Boo” at the casket.  I shot her a look one time that could have made my grandma proud right as she was about to cut up and she fell right in line.  Out of fright she even said “Don’t spank me!”  Outside of the sanctuary she was turning everyone green or blue with her wand.

When it was time to get up to read my sister took all of her royal regalia off.  I read the wrong passage.  I was supposed to read Proverbs 31:10-24 which is about a noble wife.  Instead I read Proverbs 30:10-24 which was about not slandering your master, women who act like vultures, and some stuff that wasn’t quite Godly.  I read it with confidence and kept it moving.  My grandmother would have been upset; but in the church that I ran wild in during my childhood where she would often have to shoot me a look I felt like that wound up being the perfect ending to what was our dynamic.  After everyone read Cydney wanted to get on the mic and say something too.  So we had to let her.  She said what she wanted to do over and over again.  I whispered in her ear to say Amen but she didn’t want to.  She knew that meant it was time to get off of the mic.

I missed the rest of the service dealing with Cydney until it was time to sing.  My father gave an anecdote about being around for thirty-nine years and then he started playing.  As it became my turn to sing I started to forget words.  I made up half of my part off the top of my head effortlessly.  Unless you knew the words to “A Song For Mama” word for word you would’ve thought I was doing my thing.  When it was time to sing high notes for the bridge I got a little nervous but I went for it.  I hit them too.  I was very impressed with myself.  Right after the song was over Cydney got out of my mother’s lap, ran to me, and gave me a big hug as I picked her up.  She was proud of me I think.  Screw all of that, I nailed it.

As it ended and we had the repass downstairs at the church I laughed and joked with family and loved ones.  We shared stories and there were lots of “I remember you growing up here getting into trouble” stories.  It was comforting.

After it was all said and done we went by my grandmother’s house before heading home.  The family was over and as we do we laughed through some things.  It felt different in the house.  That house on 203rd Street in St. Albans was the house my grandparents bought fifty years ago and now they were both gone.  It was just the children, their children, and their children’s children.  Right before I left to go home I walked upstairs and looked at my grandparents’ bedroom with the light off.  That light being off felt right.  The two people who occupied were resting.  I looked at it as if to give them one final nod and goodbye and began the rest of my life.