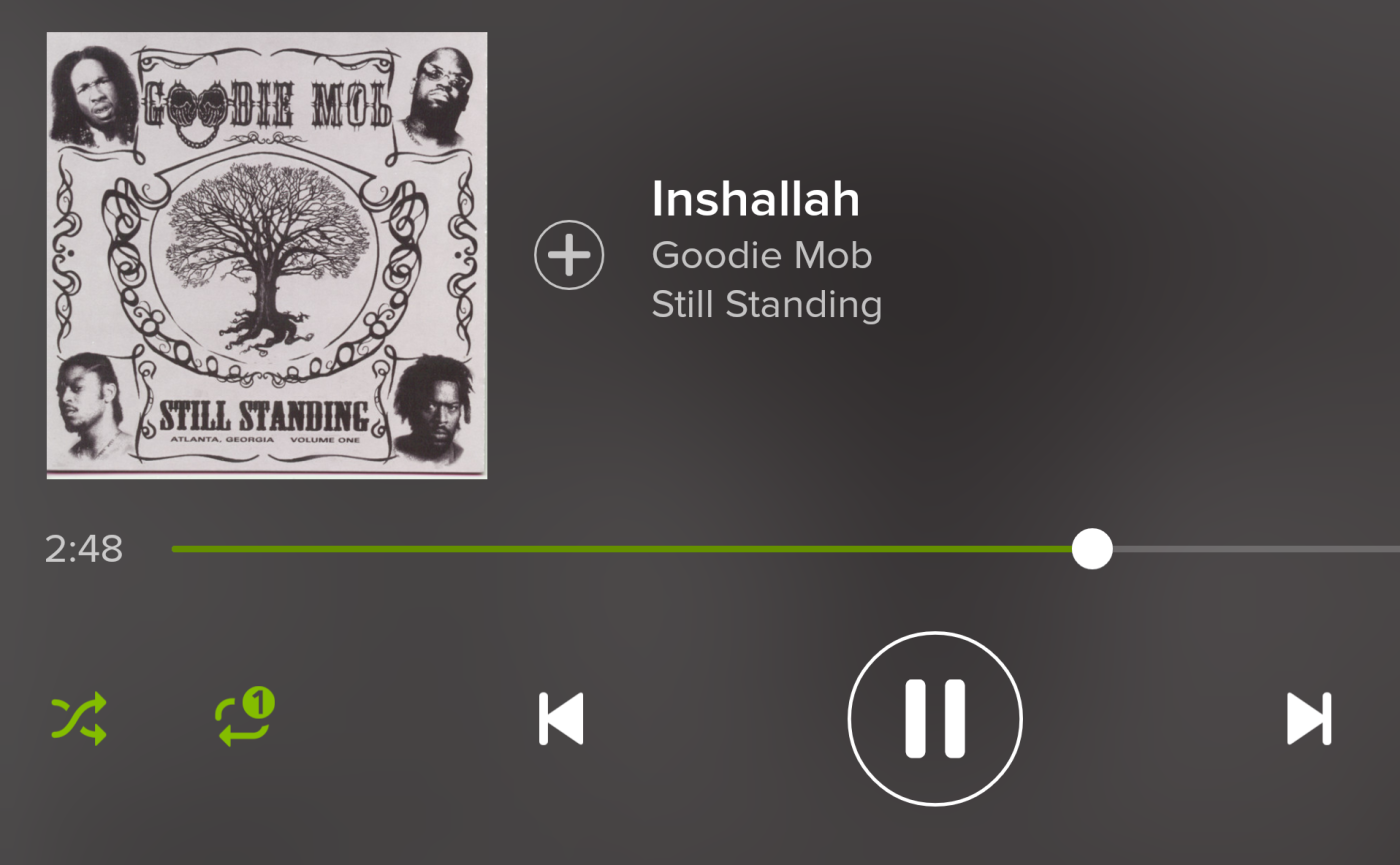 “How can I promise you forever when I can’t even promise the rest of today?  All I know is we started this journey together; hopefully we can make it the rest of the way, Insha’Allah.”

A few weeks ago, a friend and I were conversing on the phone.  She was telling me about her plans for a business she had been slowly developing plans for.  She talked passionately about it and after what I would call as a Christian “speaking things into existence,” she ended her sentence with “Insha’Allah.”

She explained that in the Muslim faith, Insha’Allah means “God willing” that one says when making or speaking about future plans.  The belief is that everything is maktub-or written-meaning that things will only happen if God allows it.  Essentially, it is a practice of submission.

Infinitely curious and putting two-and-two together, I thought about a song on Goodie Mob’s second album entitled “Inshallah.”  The song began to make a lot of sense.  Rapper-turned-singer Cee-Lo sings the chorus three different times.  The first time it is sung softly, the second a little louder, and the last one is belted.  It was as if as the song progressed the singing represented this idea of submission to God’s will.  It was always a favorite of mine off of Still Standing; but this made it the frontrunner.

The next day I found myself listening to the song repeatedly.  I like deep conversation in which I can learn things from others and pontificate about my own place in the grand scheme of things. Whenever I pray on things I go to Him with whatever is on my heart and say “have your way.” I seldom pray for things twice because once I’ve said that I’m putting it in His hands. As my favorite biblical scripture says, I don’t worry about tomorrow, for it will worry about itself (Matthew 6:33).

This is a constant battle. I’m a planner. After gathering as much information I gauge what are the possibilities and based on the variables what will happen based on probability knowing who and what is involved. I am a true believer in Rudyard Kipling’s second to last line in Invictus: I am the captain of my own fate. I don’t think there’s anything I can make happen unless there is divine intervention to circumvent it. For once in my life, I’m trying to just live for a season. I guess I’m leaning a little more towards just doing my part and letting the rest happen. So far, doing all of the above has worked for me. In fact, meeting my friend who introduced insha’Allah to me was me taking fate into my hands and making it happen with keeping in mind God will make things happen and things will fall into place.

Because of this belief I have always had, I take the idea of living for today seriously. For most people my age, “tomorrow isn’t promised” is an abstract concept. My peers and I are young, so the laws of average suggest that there will be a tomorrow. It is not an ideal for me; but practice and applied knowledge because of the journey God has ordained for me. I don’t make promises because my word is everything. If I feel a way about someone today I will let then know. If I love you I consider you a priority that I want to bask in that light. For all I know, I could be gone tomorrow. It is also the reason I don’t hold a grudge. For what?

That’s all for now…tomorrow there will be another song and post, insha’Allah.