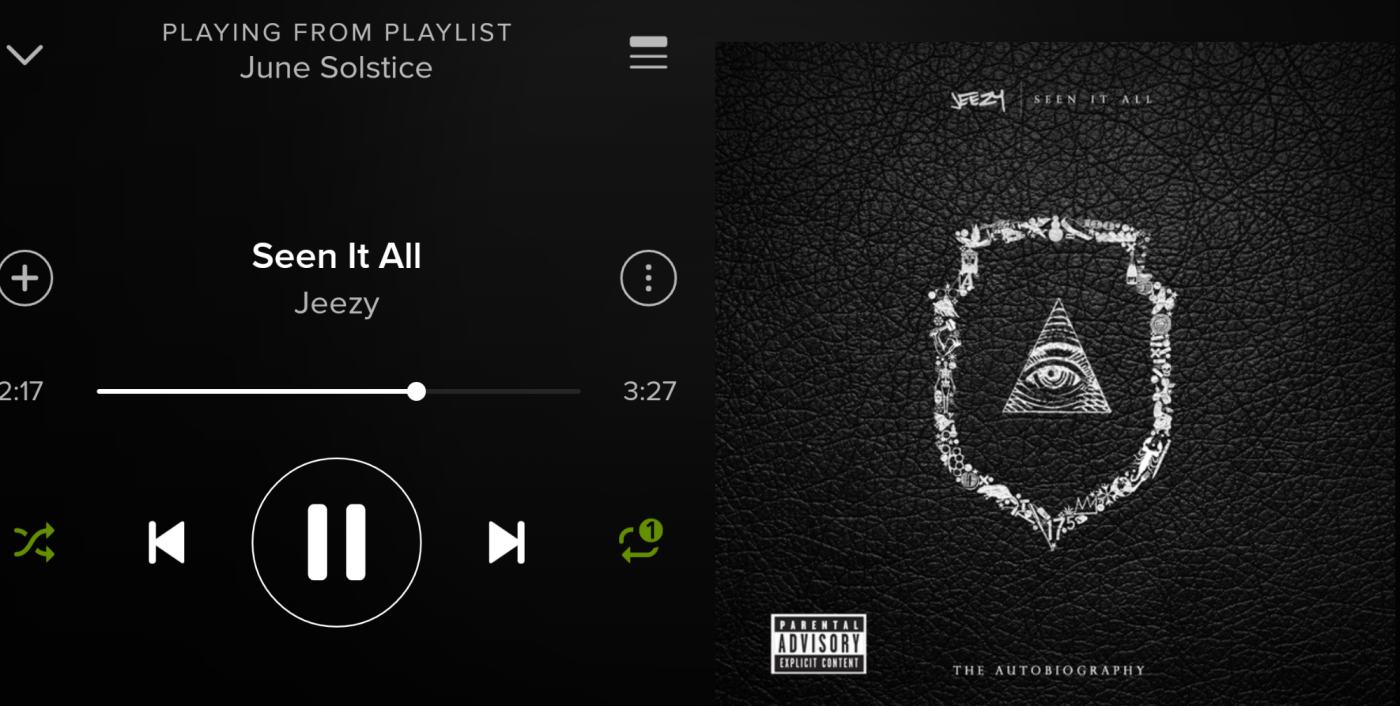 I joked with a friend of mine saying that after returning from Virginia “I feel like the realest nigga on the planet.” While such a statement may be hyperbole, a part of me does feel as if I am cut from a very rare cloth. I may not have visited Timile’s actual grave like I planned to; but I actually visited her parents and set foot in their house. The feeling of fearlessness and relative peace I have had is empowering.

For my first twenty-four hours back in New York all I could listen to while in a reflective state of mind was Jeezy’s “Seen It All.” It’s a dope song in which the track itself sounds like a song at the end of the movie where one can’t help but look back after the proverbial dust had settled.

I think what really drew me to this particular song was the story Jeezy told about Jay Z’s verse. Jizzle said that Jay Z had tears in his eyes as he recorded his verse.

I believe every verse Jay tells about his past. Coming home during my freshman year from college I sat next to an older man on the plane and read a XXL magazine with Hov on the cover. The man next to me with gray hair and glasses looked at it and said to me “Jay Z. I used to buy crack from him on the corner of Myrtle and Marcy Ave.” That moment put a face to the stories Jay told of “Selling snowflakes by the oz.”

I say that because for that to be one of the most personal tales Jay has ever told, the tone is his voice sounds no different than when he’s professing love for his wife, gushing over his daughter, or being a mysogenist fifteen years ago. For as casual as someone can tell you a tale-even if they have moved on-you have no idea what it feels like. All of the details can affect a listener-or in my case, the reader-and it’ll never do justice to the actual moments that defined them. There’s such an even keel about Jay Z that feels as if there is very little that rattles his cage because of his experience. Behind that nonchalant demeanor is someone still closes his eyes and sees these flashes of traumatic experiences that while he wishes he didn’t live them knows it has played a major role in his success. I know because it happens to me.

One of my close friends died last Monday. I wound up spending most of the day by myself reflecting on all of the times we talked about everything we had been through over the last five years. That night while Cydney was lying in bed she asked to look at pictures of Timile, herself, and me. She then asked to see pictures of the three of us and my friend together and I had to let her know those don’t exist. I did the best I could by showing pictures of her and us separately. She then wanted to see videos of Timile and her.

It was an interesting moment albeit one I wasn’t in the mood for. Cyd would look at them and at “I remember that,” even though the video would be of her as an infant.  The videos gradually progressed from Cydney being held by her mother, to following her mom around in a walker, to her toddling around with me, to a four year old who can juggle a soccer ball exceptionally well for her age. I looked at those videos and said “Aww, I kinda miss you being a baby like this.”

Somewhere between fighting sleep and being Cydney, she said “I miss being a baby, too,” and began to work herself into tears. She has a complex about missing things. She’ll say she misses the most insignificant thing, but in the moment it means the world to her and it makes her cry. It’s because she knows something is missing in her life. Cydney was articulating that she wished she could go back to the time when her mother was alive. She then rolled her face out of the pillow, laid her head on my shoulder, and said to me “I don’t have a mom,” in a very sad voice.

That was a crushing moment. Cydney has said this before. What made this time very different was that the person I would call and would joke with until I felt better died that morning. It was one of those moments I will always be able to close my eyes and see.