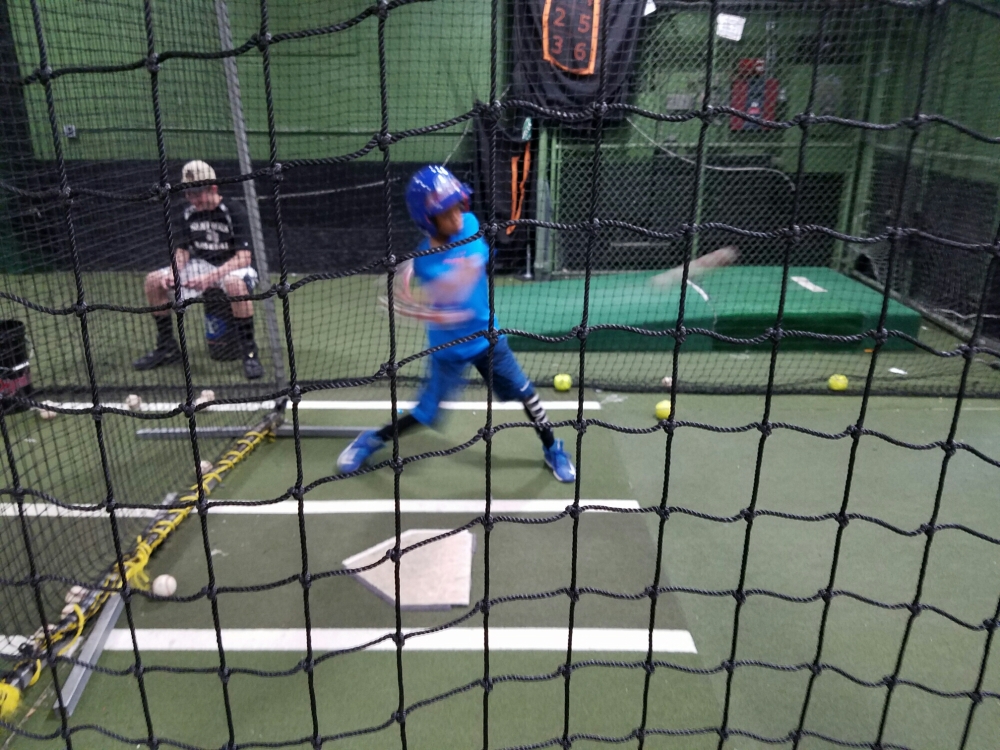 Little league baseball is a rite of passage for boys.  In America, one would be hard-pressed to find a man who has not spent a spring on the diamond.

Even though I played basketball year-round as a child, spent my high school years on the football team, and follow the NBA and NFL intently; baseball is my first love.  Ever since that first game in the St. Albans Little League on Liberty Ave in 1991, I’ve been hooked.  Once the weather gets nice, I get the “itch” to play.  There’s a part of me that wants to play in a 30-and-up hardball league; but I don’t have the time.  However, my needs are satisfied through my nephew.

At ten years old, my nephew is in the middle of his fourth year playing organized baseball.  He started off with tee ball and began to show he had potential.  But he was and still is just a kid.

While playing catch in the backyard, after I threw the ball, he would flinch as it came in his direction.  I’d tell him “The more you flinch, the harder I’m throwing the ball,” and I would do just that.  Every once in a while he would get hit and begin to cry.  I’d look at him and this would be our conversation each time:

Me: You got hit because you were playing afraid.  What’s the worst that could happen?
Courtney: I get hit with the ball.
Me:  You just got hit.  Was it that bad?
Courtney: No.
Me: The absolute worst thing that could happen just and it wasn’t that bad.  Now you have nothing to be afraid of.
Courtney: *ceases sobbing and continues to play*

In the past four seasons, my nephew has had amazing tutelage in Coach Frank.  The combined talent of Coach Frank’s son, my nephew, a few mainstays and a revolving door of other teammates has lead to something I love: winning.  Those two boys-and my nephew’s friend, Mike-have enough talent and potential that I truly believe one day I can say “I knew them when…”

At first, I watched from the stands.  It was six year olds hitting a ball off of a tee and everyone bumbling around except for Coach Frank’s son and my nephew.  The more time I spent around Coach Frank and his team, the more I became invested.  The families of the core five players have become extended family and when the draft comes along in the spring, there’s a strategy to keep “the band together.”

This spring, all of the boys moved up a division and my nephew was drafted to another team.  Coach Frank wasn’t having that and traded his first pick to make sure he kept his son and my boy together.  It worked out.  Coach Frank’s son had the highest batting average in the league and I watched my nephew clinch the championship with three strikeouts in nine pitches.  We celebrated for three days and then it was for travel-ball in the summer.

Travel-ball is a completely different beast.  The boys are playing against ten and eleven year olds.  Our team is comprised of half ten, one eleven, five nine, and two scrappy eight year olds.  The first few games have been an adjustment and rude awakening; and quite a few of the boys are more than up for the challenge.

Yesterday, our U-10 team practices with the U-12 boys (Note: U-12=twelve year olds).  U-12 is more intense; but I liked the idea of seeing who out of our bunch would rise to the occasion.  Almost everyone did.  I was proud of all of them; but I was especially proud of my boy.

Because my nephew has a cannon for an arm by ten year old standards, he plays third base.  The first drill consisted of fielding and gunning the ball to first base without breaking their stride.  With a longer distance than the ten year olds are used to, my nephew nailed it.  On the diamond, he looked like one of the U-12’s.

While the teams scrimmaged, I conversed with Coach Matt, the manager of the U-12 team.  We talked about how as an organization, all of our teams are mentally lazy and show up once we’re in the hole.  My nephew just happened to be at bat; so Coach Matt and I looked at his form while he was at the plate.  He sent a line drive that dropped mid-center field and rolled all the way to the gate; the furthest hit ball of the evening.  Coach Matt looked at me and asked “How old is he?”

“He just turned ten May 30th,” I replied.  Coach Matt shook his head, chuckled, and told me “He’s ten?!  Once he gets the rest of those mechanics…whew!”  I couldn’t have been more proud of him.  Coach Frank couldn’t make it that day; but I wish he could have seen my nephew-and how many of the boys looked-that evening.

My slowly degenerating shoulder may not allow me to play competitive hardball again.  However, watching my nephew scratches the itch.