Posted on October 15, 2012 by The Adventures of A Single Dad 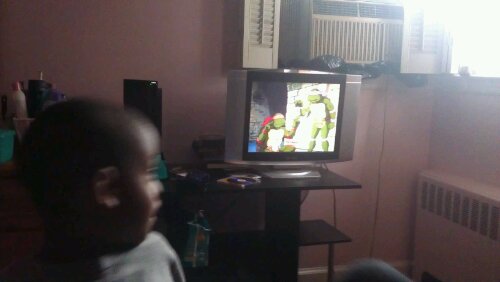 Saturday morning I woke up to a familiar song that sounded a little different than I remember. As a musician I recognized the music instantly but something about it sounded unfamiliar. I walked into my nephew’s room and he was watching the brand new reboot of Teenage Mutant Ninja Turtles and was all into it. I’ve seen for weeks they’ve been promoting this thing everywhere from Nickelodeon to the BET Hip Hop Awards so it must be a big deal or it wouldn’t have such a huge budget.

As a former turtlehead I was curious and wanted to check it out. They’ve done numerous reboots but nothing never recaptured the magic of the one I grew up with and they’ve all been cancelled or no sequel to the movie. My nephew loves it. Me? Meh. It’s different. April O’Neal is a teenager and the Shredder is NOT Oraku Saki! Boo! I told him we’ll watch the real turtles tomorrow.

I found a DVD my fiance had bought me a few years ago that had classic Ninja Turtles episodes on them. We sat and watched. He said he liked the new one better. I said then hoe come your eyes are so glued on it. He said “This show doesn’t have enough action.” I immediately became an old man and thought “That’s what’s wrong with your generation!” because they can no longer sit through a show with dialogue (then I thought that’s probably why the other shows failed).

My nephew then told me his favorite was Raphael because he could fight the best and is the leader. I told him in the way that kids talk “Nuh Uh! Leonardo is!” I told him Leonardo is because he was the level headed one. Raphael had too much attitude, Michelangelo was too lighthearted, and Donatello was a good role player. I then told him that in the school yard I always had to be Leonardo when we played Ninja Turtles in school at recess and no one ever wanted to be him. I told him that being the leader is the hardest but requires having a certain kind of head. It means being a certain way so that everyone can look to you to be the example.

I hate being the parent who makes everything into a lesson but that one was too easy. Plus my nephew is at that age where he needs that. He has all the potential to be a leader but its in children’s nature to follow so even if he doesn’t remember it right away I still gotta put it in his head.

One thought on “A Lesson from the Ninja Turtles”